May Star Doll of the Month 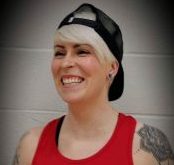 We get to know one of our newest skaters but also a returning skater. 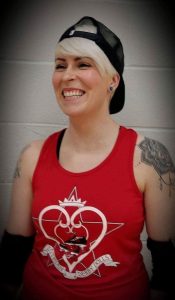 When did you start roller derby?

I originally started 4 years ago back in 2013 for a year before I had then went off to have my baby. I just came back at the end of last year again.

How did you become involved in roller derby?

It was through one of my friends who came along and skated with the Dolls she asked me to come along and watch a training session. Then at the session she said well you might as well stick some skates on. I said OK and then Cain started whipping us into shape and he shouted at us what to do and then I did. Then I was hooked.

What is your skating/other sport background?

No sport background what so ever. The last thing would have been Netball back in primary school. I went to a running club for a couple years because I was doing cross country running but that was really it.

I shy away from jamming but I do secretly like it. I’m like don’t make me do it but then when I do it I’m like that was amazing, do that again. At one point I didn’t like being pivot at all up until my first public mixed game in Glasgow and then when I just kept getting put as pivot. Though with no one knowing each other on the team, I stepped up and had to talk as nobody knows any one else nobody will know what to do if I don’t speak and we all be screwed. It forced me out my comfort zone. Though I do like blocking equally. I can go for ages with doing it feeling like I’m not doing good or getting anywhere blocking but then one small thing I do it all comes together and I’m like yeh that was it.

I don’t think have it yet. Although on the Glasgow game I got Best Blocker and was surprised by it but happy. Also the Co-Ed scrimmage we had with Mean City recently I really enjoyed.

Has playing roller derby taught you anything?

For me with all the anxiety and post-natal depression that I went through it reminds me that I can be back to my true no matter how far I had got away from myself I felt. I somehow found my way back by having the people in league and time for me to find myself. With a supportive and such a great crew. It’s the best feeling finding myself again. The listening ear from everyone and how engaging and supportive of everyone from new skaters to old timers in the league.

Has to be Shortstop. Because of her determination I see on track. Equally is half of my team cause there all ace.

I have just nominated myself to be part of the Health & Safety committee because I’m a dental nurse I have that first aid background and wanting to check and nosy if folk are OK and always willing to help were I can.

What is your job?

Have you ever been injured through playing derby?

Yeh. I popped a tendon in my right ankle. I thought I was going for a broken ankle cause of the sound I heard when it happened but the x-ray showed no break I was very surprised. I also got bursitis under my left knee cap so was splinted from thigh to my ankle with straight splint so was on crutches for a bit. So I look after my ankle loads now and love my knees a lot.

Any advice for a new skater?

Just keep trying. It will happen. You may think you will never get past what skill you stuck on but you will happen in it’s own time. It’s the best advice I can give is don’t give up. We will all support you there.

How long did it take you to pass min skills?

Well before when I first started I had got a good amount of skills under my belt, but hadn’t done them all. It was also 25 in 5 back then for me. At least 6 months I reckon to get them. So when I came back I knew it was going to be hard for being off skates for a few years but my mum said you will surprise yourself that I’m probably fitter as a mother than I was before I came mum. So after I came back I managed to get all my min skills done after a month checked off and do 27 in 5 where I wasn’t sure I walk back to my car. I knew I was more determined this time round since I had basically done them before I was off skates.