April Star Doll of the Month 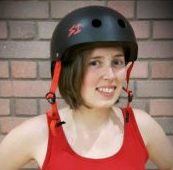 This month get to know our hard working on and off track Knight Fury. 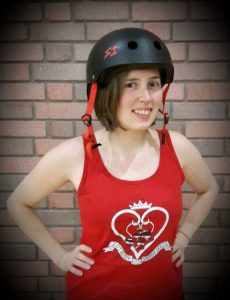 When did you start roller derby?

I started in Late August 2012, a week after I moved to Edinburgh.

How did you become involved in roller derby?

I have a friend that plays with Fierce Valley Roller Girls who invited me to watch them play and said that I’d love it.  She was right! I was immediately hooked but there were no leagues close to where I was living at the time so I bought skates the next week and started teaching myself to skate…well… stand upright. Another friend had not long joined the then newly formed LDD and so when I moved to Edinburgh I joined LDD.

What is your skating/other sport background?

I did a little athletics, netball and gymnastics in my youth but took about 10 years off sport before starting skating.

‘Never give up, never surrender’

Although I tend to Jam a lot, which is really fun, I also really like doing offence for my jammer.

There are so many good moments, most have been great moments because the team have worked well and something magical has happened. One of my all time favourites was in our second ever game which was against Coventry at home and I did this awesome offence off the line to clear a path for our jammer to get lead. We were out numbered 4 blockers to 2 on track and the Coventry blockers were super strong and sturdy it was awesome.

Has playing roller derby taught you anything?

It’s taught me to really recognize and utilize different people’s strength and how to be patient and trust my instincts both on and off track.  It’s made me also very aware of how to manage my physical self when coming up to a game, eating and thinking about energy management and my mental game too.

My league would tell you it’s Raw Heidi.  She’s so cool and amazing on track. Or Stef Mainey, cause she taught us so much through her bootcamp.  My hero of the moment is Rogue Runner; her jamming is amazing! Best part is I got to meet them all and all the Gotham team last year when they played in England. Oh and can I say my league mates? They are all a massive inspiration!

Over the years I’ve held a number of roles within the league. I’ve been on the board for 4 years.  Three years ago I became the Chair of the league and supported the growth and development of the league; it’s been great to see and be a part of so many positive changes over the years. I am also a team coach and new skater coach.  I really love coaching and in particular our new skaters, as they are so enthusiastic, you can’t help but reconnect and remember why you play and train roller derby. I’ve also recently joined our bout organizing team, and hope to bring my events management expertise to the role.

What is your job?

I work in Student Development and organised events at a local University.

Have you ever been injured through playing derby?

Yes I have, thankfully nothing too serious so far. *touches wood* I’ve had a couple of sprained ankles, I’ve been winded badly a few times the worst was recently injuring my MCL in my knee that wasn’t fun but I could still walk just no impact activity on it. It’s been a tough year for my poor legs!

Any advice for a new skater?

Don’t compare yourself to other skaters, everybody learns at their own pace so avoid trying to use your new skater pals as a benchmark.  Do watch other skaters though and see what you can learn off of watching them!

How long did it take you to pass min skills?

I did my mins quite quickly, from first joining LDD to playing my first game it was less than 6 months so I think I was mins passed after 4 months. There were a few things that really challenged me; backwards skating was my nemesis for the longest of times. I also had to deal with the minimum standards changing on me too. Hit my 25/5 then the next week it was ‘oh you need 2 more laps’. I may have cried a little.