Darth Does Us Proud 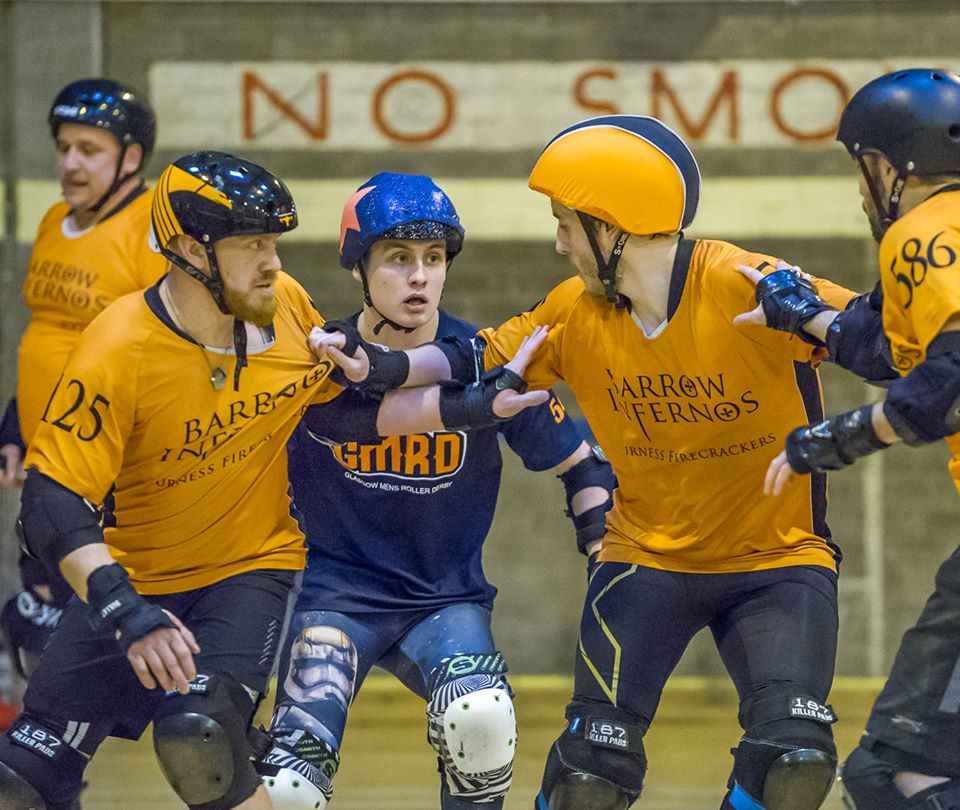 An Interview by Fully Harmed.

I have been lucky enough to skate with Darth for just under 3 years and I have been able to watch him to grow into the amazing strong skater he is today.  I wanted to interview Darth because he is very modest and everyone at Lothian Derby Dolls and Fear and Lothian are so proud of him being selected to skater for Scotland.

OK why did you start playing roller derby in the first place? I started playing roller derby after my Fiancée had shown me a documentary she made about it at university. After watching it I was hooked! How many leagues have you skated for including guesting? I’ve skated for CCRD, LDD/FnL, MCRD, GCRD & GMRD. So I believe that’s 5 Leagues in total!

Who has been your derby hero? That’s hard to say. I wouldn’t say I have one “hero” but rather several different skaters I revere and try to learn from by copying or via advice they give. My biggest inspirations right now would definitely have to be Tea-Virus and Wrighteous, I’m learning loads from their advice and play styles.

Since being selected for POS has anything changed in the way you are treated in the derby world? To the best of my knowledge I don’t think it has, I hope not.

What is the best thing about being in the Scottish derby world? The best bit about it’s is definitely how easy it is to feel like part of it, right from the start. It only takes a few Grangemouth scrims or Dundee Co-eds and all of a sudden you just feel included in this giant community of encouraging people.

How do you keep your ankles so bendy and are you from the matrix? I replace my real ankles with rubber replicas before I skate. 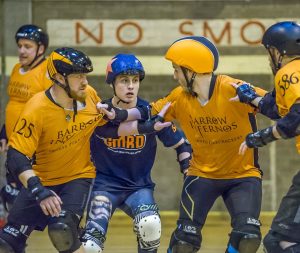 Do you have a preference for Coed or Male derby? I participate in the two of them for different reasons. Like, Coed is more so that I can have fun with the sport and all of my friends in the community whilst Men’s derby is mostly for the competition and the chance to improve my game more than anything. It’s still fun just with a more serious edge to it!

You skate with LDD and GMRD while training with POS can you skate too much? I’d say you can, but as long as you know your limits and don’t push it too far then you shouldn’t hold yourself back if you want to skate.

You’re an amazing Jammer but is it your favourite position? Yes. I recently tried not to jam in a game, the result was a very antsy Darth eyeballing the Jammer panty at every opportunity.

What was the first thing you did after finding put you were selected for POS? I called Ciara, my fiancée, and my parents to tell them the news. After that it was a case of telling myself that this was only the beginning on a long journey to the World Cup and making the final 20.

What do you think will be the biggest challenge of playing for POS? The hardest part is reminding myself not to belittle my own ability. The skill at POS training is phenomenal, and I’m clearly part of that, but you can forget that from time to time when you’re surrounded by so many talented skaters

Darth has a brilliant quality to put new skaters at ease and no matter how rubbish you feel about your skating he finds the positive in what you can do and he has done this a thousand times for me.

All of us wish you so much luck skating with Power of Scotland and we will be watching and cheering for you all the way.