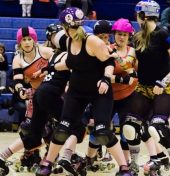 “5 minutes left” I said looking at two tired Dolls panting beside me in the box.  Beginning Arrgmageddon Tournament we had ten skaters (four short of a standard team) we now had seven left in play. Our final game of the day pitted us against the Fight Hawks to decide who would take third place in the competition; three of our players had fouled out.  A hand reached out and took the jammer panty from my grasp.  We all held our breath, watching the track where our Lothian Derby Dolls (LDD) blockers were holding the opposing jammer preventing any points being scored.  The whistle blew and the Dolls at my side darted to the start line.  Silently I signaled to three returning skaters to join them.  The whistle blew and they were off again.  In roller derby there are five players from each team on track for each jam, four blockers and one jammer.  With only seven Dolls in play and five on track for each jam there was a whole lot of track time for everyone, after already playing three heats in an all day tournament, it is safe to say all were knackered.  Going into the tournament LDD were very much the underdog.  As the only non-WFTDA league competing we are tiny by comparison to Granite City Roller Derby, Dundee Roller Girls and Auld Reekie Roller Girls who all had B or C teams competing.  While other leagues may outmatch us in numbers and resources there is more to playing than winning and LDD were a shining example of positivity, passion and good sports-woman-ship.

The heats started well as LDD kicked off the tournament with a neck and neck game against Granite City’s B team the Fight Hawks. With only three points in it the final score stood at LDD 99- Fight Hawks 102, it was so close we thought we may have won as there were interesting discrepancies happening due to a new (and sensitive) score board system.  After rest and refuelling watching the other teams heats the Dolls went on to play Dundee’s B team the Bonnie Colliders.  LDD had been battered by the Bonnie Colliders ten months previously at the Jack Kane Centre but the Dolls playing at Arrgmageddon stood solidly together; the final score of LDD 31– Colliders 128 was such an improvement we felt elated!  The Dolls immediately regrouped to play Auld Reekie’s C team the ASTROs.

Auld Reekie are a bit of a nemesis to LDD as the catchment for both teams is the Edinburgh area and LDD was established by former Auld Reekie skaters. A number of Dolls, including myself, skated with Auld Reekie before moving over to LDD. The only similarity between the two leagues is that we play roller derby. LDD is the smaller, more relaxed and accommodating of the two leagues and as such attracts a lot of mums, shift workers and out-of-town dwellers, we also welcome male skaters.  While Auld Reekie’s teams are selected from the most committed skaters in the league LDD has a much smaller pool of competitive skaters to work with, hence playing the gargantuan Auld Reekie can be a bit intimidating to us Dolls.  Despite initial reservations the Dolls played a strong game, ending amicably with a respectable LDD 19- ASTROs 132. We may not have scored high but we succeeded in blocking many a scoring pass and our point differential was on a par with the other competing teams.

The final deciding game really tested the team.  It had been a long day already.  Playing the Fight Hawks for third place seemed achievable at the outset, we had been neck and neck with them in the mornings heat after all.  We started off feeling positive but tiredness soon became apparent. Sometimes tiredness is a friend. The more you skate the less you have to consciously think about skating.   Not thinking about skating gives your mind clarity to focus on the game.  But sometimes tiredness feels like dragging a heavy rock.  The Dolls were topping themselves up with glucose gel to get them through. We lost one player to penalties, then another… As line up manager I highlighted the positives to the players to keep up their morale, I encouraged them to stay focused on the present and plan for the next jam rather than get caught up in past, and they did. They rose to the occasion when I suspect they probably felt like flopping onto a comfy chair, possibly with a large cider. At the final whistle the score rested at LDD 127- Fight Hawks 213.

Officially we came fourth in the tournament but no-one was disappointed, not our opponents, not our supporters and not our players.  Every Doll skated her best, played her best, tried her hardest and kept her head in the game. I could not have asked or expected more. 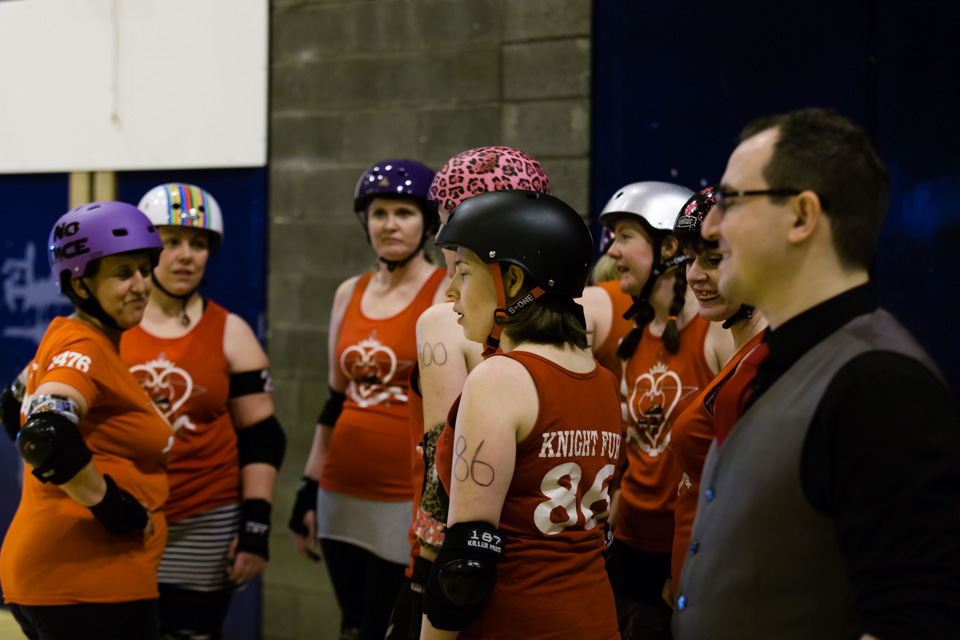