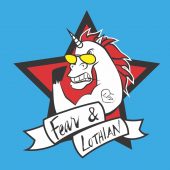 The whistle blows a sharp, single burst. Before I know what’s happening, the team mate whose arm I was so recently holding is flying backward through the air to land hard on her back as a gigantic bulldozer of a jammer effortlessly flies through our wall.

Hold on; let me backtrack a bit…

When I first watched a Derby bout less than a year ago, I was struck with a very immediate sense that I wanted to be on that track. I had no idea what was going on, with only a very loose (and inaccurate) sense of the rules, based on watching Whip It once, but I was hooked. I needed to be part of this. Sadly, I’m a man – if a gender queer one – so there wasn’t any opportunity in Edinburgh for me to play with those powerful, agile, amazing women I saw on track that day.

Thankfully, the Mighty Unicorns of Capital City were there to welcome me. And welcoming they were! Now, please understand that I haven’t been in a room with such a high ratio of men in a long, long time. I don’t watch the Footgame or the Rugbies, and I have no interest in cars. My worry was that an all-male league would fall into the trappings of hyper masculinity that so many male-dominated spaces do and that I would be very, very uncomfortable. Luckily, that couldn’t be further from the truth!

Despite the fact that my team mates were all cis men, Roller Derby is still a female-led sport, and that creates a very different atmosphere even in most of the men’s leagues. However, the greatest joy for me was always when we had friends from the women’s leagues join us for training or scrims. This was the kind of atmosphere I was made for.

When the Lothian Derby Dolls invited the unicorns to come join them at their training for the month of May, I jumped at the chance. When I caught wind that there was a co-ed bout to happen and that LDD and CCRD were joining forces for it, I was practically floating!

Fear and Lothian was my chance to play the kind of Roller Derby I had always had in my head!

Coming to the LDD training was a very different experience from CCRD, perhaps because I had barely passed mins before I was thrown into constant scenarios. We were doing jams and I was still struggling to even stay upright! The sessions with LDD were often focused on developing core skills with jams and scenarios finishing off the training, and I felt I gained a much surer footing than I previously had, and a more granular understanding of roller derby.

The atmosphere wasn’t hugely different, but there was definitely a certain je ne sais quoi about the co-ed nature of it. While I personally believe that gender and sex are very socially and culturally informed constructs, those constructs do lead to different behaviour and priorities. Also, the bare fact of physiological differences made for a very varied experience, and an opportunity to learn from different ways of moving about the track and knocking each other off it. It was honestly such a buzz.

The bout with Mean City loomed closer and closer as we focused more and more on jams and scenarios. And then the day came! Were we afraid? Of course. Were we excited and raring to go? Absolutely!

As internet click-bait headlines say it: You won’t believe what happened next!

For the first fifteen minutes of the first half, Fear and Lothian stayed neck a neck with Mean City’s much more seasoned skaters (including former CCRD league members and even Optimus Grime, who also skates for the Scottish National Team, Power of Scotland!), even passing them on the score board a couple of times. Now, understand, many of us had never even been on track together until earlier that same month. We’d barely had three weeks of skating as a team, and not a single scrim under our belt! Those first fifteen minutes were like some form of miracle.

Mean City weren’t having it. With their superior experience and agility, they redoubled their efforts. The spell was broken, and the Meanies pushed past us. Their blockers shifted their tactics to stay a step (or a cross-over) ahead, and their hardest hitters started hitting much, much harder.

And that’s us back to the sight of Jugz flying backward through the air as Optimus Grime flies through us. It was in these moments I could feel my inexperience. As soon as the whistle blew, I struggled to keep a sense of where Mean City’s jammers were and they’d be through the pack in seconds. We leaked like a sieve. Through many jams, our inexperience as a league meant that we didn’t have a wall as the opposing jammer breezed through the pack while we desperately tried to do everything at once.

As a team, we have a lot of strengths. There’s an incredible willingness to lift each other up and to encourage and push each other to be even better. There is no bickering. We seem to learn quickly together and genuinely love playing together. We also have a lot to learn, of course! We need many more months of practice to truly cohere and to be able to change our tactics depending on the situation. We need to develop the flexibility and strength as a unit that can only come from spending time on track together.

But was it fun? Oh hell yes! There were several jams that ended in myself coming off the track with a massive grin on my face. I didn’t care how many more points the Meanies had pulled ahead of us, I was on an absolute high from the amazing feeling of the little moments. The near misses. The mistakes. The little triumphs.
After seeing Optimus casually knocking my teammates to the floor, and eventually being knocked flat on my face in just such a manner, I grew determined to get him. One jam in particular, as he came through our defences, I would put all my weight and force into getting him down or off track. I never succeeded, but I gave him a few good shunts, and next time we are on track together, I am determined to get that guy! I am indeed made of sterner stuff, Optimus, and you shall paaaaay!! 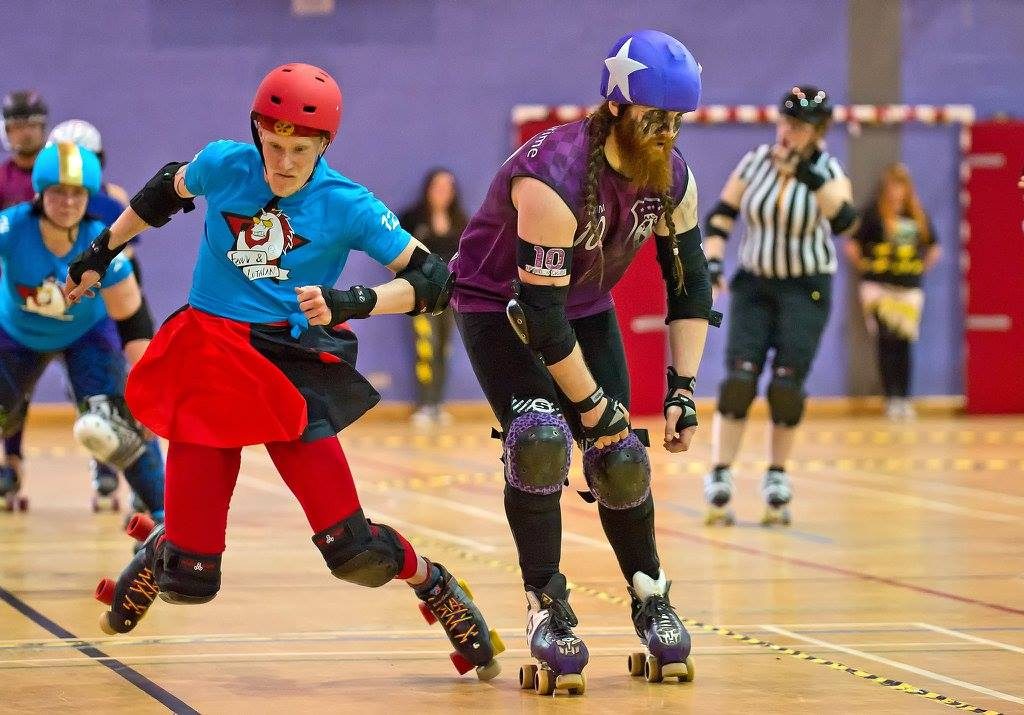 My first experience with Co-Ed has been wonderful. An open, supportive, safe (relatively speaking!) environment for people of all genders to come together with their own strengths and backgrounds is exactly the ticket for me, and I am crossing all my fingers and toes that Fear and Lothian get to do more bouts and scrims soon.