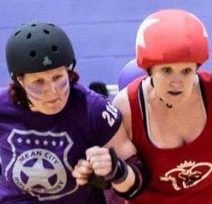 Four weeks ago, approximately 14 months after my love affair with roller derby blossomed, I strapped on my pretty little bum bruisers in preparation to pop my derby playing cherry by taking part in my first ever, public bout as part of the team for Lothian Derby Dolls [Oh the pride].

I was nervous. Roller derby being the contact sport that it is, I was fearful of getting badly injured. I was anxious about skating in front of spectators; not only was it my ‘debut’, it was my first time properly skating in public, in front of paying public, and people who actually know something of the rules and gameplay and who may have an opinion on my ability or performance. But my biggest anxiety was to do something daft and let my team, my lovely Dolls, down*.

I have never been a sporty person and probably still don’t even count myself as such. Sure, I’ve done a bit of running and tried the occasional zumba or aerobics class but derby has brought out an athleticism I never even knew I had. Skating is addictive. I am unashamedly addicted.

On the way to the game a million things were going round and round in my head; Are my skates in the car? Where is the point of no return? Remember how to re-enter the track. Are you sure my skates are in the car? What if I don’t hear the refs**? Maintain the pack. What if I hit the bench when I get to the sin bin to serve a penalty***? What if, what if, what if… Stop the car. I need to check I remembered my mouth guard!

I don’t know if other leagues do it, but at LDD we have bit of a tradition where each player on the team has a little motivational ‘love sheet’ created and given to them before the game. Every player is asked to write something about each of their team mates; a word or phrase that describes them, something they admire, that kind of thing. The changing room was bursting with the warm and fuzzy love. Such a lovely thing to be reminded about positives and funny things when you feel pretty daunted about the game ahead of you.

Kitted up and waiting to get on track for our warm up I felt positively nauseous, the adrenaline surging, making my heart creep up into my throat. Fight or flight? A bit of both would be pretty good for the bout.

Then the first whistle went and the bout started. At this point, it’s all a bit of a blur, wall up, jammer on, hold, hit, push, reform, brace, where’s the jammer, hold her hold her…

And it’s true when people say as soon as you start skating you don’t notice the audience. At some point in the first half came the question from Line Up Manager, “You wanna try jamming?” as the red pantie with the white Jammer’s star was held

towards me. “I will”, was my verbal response, although I confess it was something more like ‘er, no! Do I heck! I can’t jam! Oh god, oh god, oh god!’ But, again, derby had me stepping out of my comfort zone and pulling the jammer pantie on over my helmet. 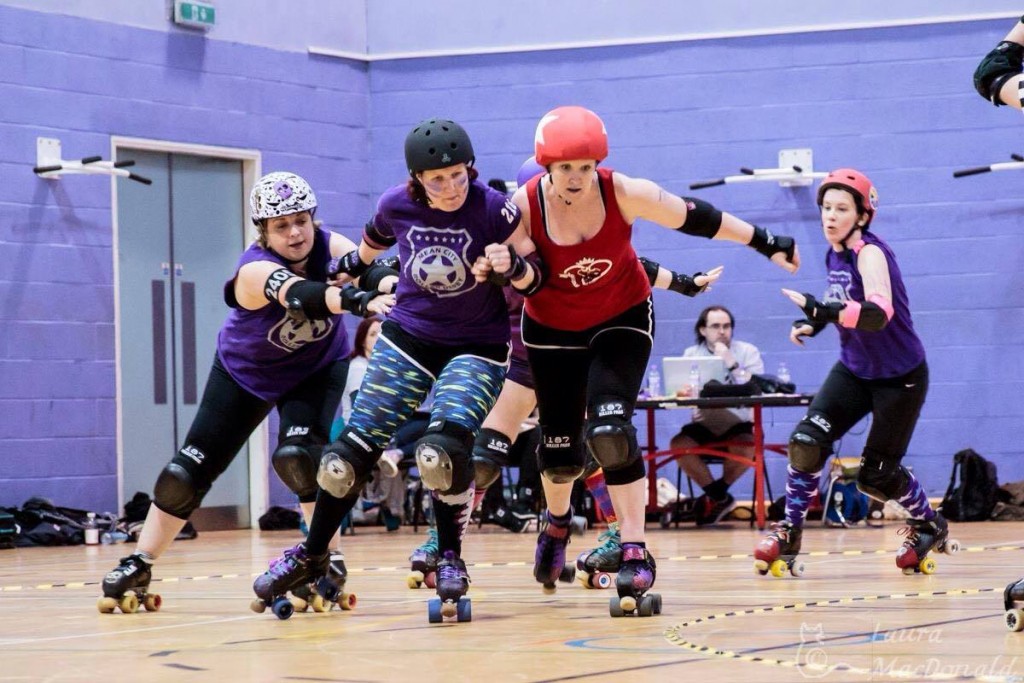 I took to the track. Where the heck am I going to go? No idea. Doesn’t matter. Just get through. The starting whistle went followed by lots of pushing. Eventually I broke through the pack. Was I lead or was I not? I didn’t know and didn’t care …that moment was a slow motion moment that could only be accompanied by the soundtrack to ‘Chariots of Fire’. … Just keep going. You might even score some points. I gained on the pack and hit the opposition wall, somehow getting through again. Then, as I went around the corner I hear those three beautiful words from my bench “CALL IT OFF!” Wait! That’s my bench – better call it off. I patted my hips until I heard the four rhythmical blasts of the refs whistle. Wow, I got lead jammer my first time with the star on my head and scored a few points too.

Our violet clad opponents were super. Their defense was good. Their offense was good. One blocker in particular comes to mind. If I went to jam inside, she was there. If I went to the outside, she met me there. Time and time again I got knocked off track and each time I hit the wall willing the jam to end. Every time I made a break through their wall they swarmed and ate me up. After the full two minutes the jam ended. I was gubbed. But each of those blockers gave me a ‘well done’ and hug as we exited the track. I wasn’t sure what actually playing against another team would be like. Would they be fierce? Would they be hard? Yes, all of those things but equally warm and encouraging. 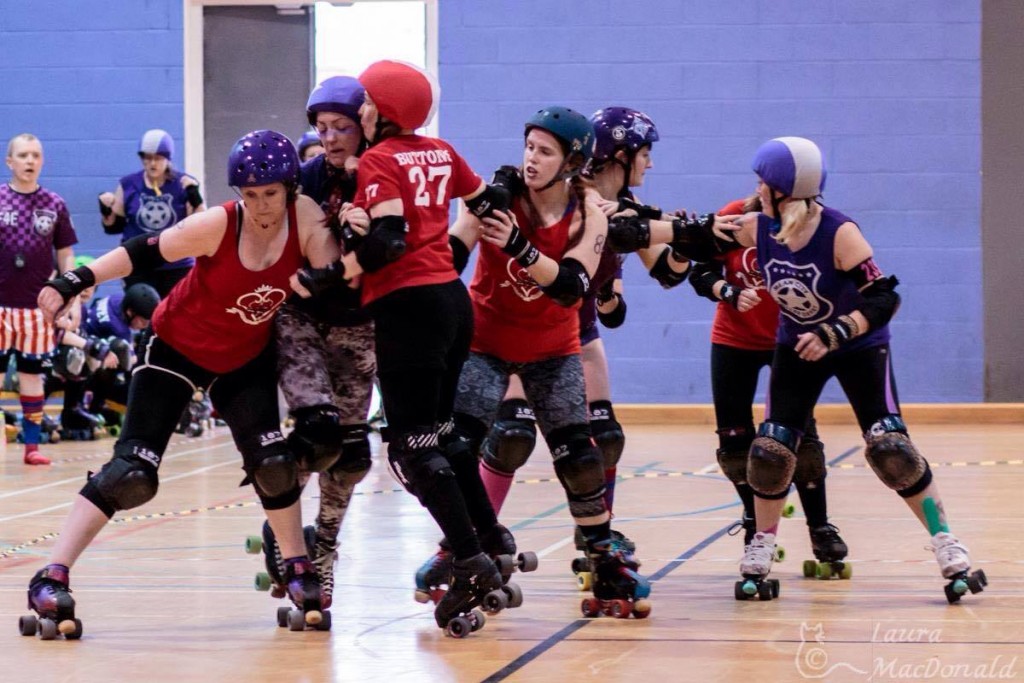 We didn’t win the game on points; that triumph was for our lovely Mean City Women opponents. But each player reached a personal goal that day and as a team we were confident we had given it our all and had made positive progress.

“I did it!” I beamed as I hugged my Captain, congratulated my teamies and opponents and thanked the officials. I left with a great feeling of achievement, a handful of bruises, even more love for my derby family and a list of things to practice and improve on.

So today, I am strapping on my skates for my second public bout. I don’t know if we’ll win, or how many trips I’ll make to the bin. However, I do know that I will skate my socks off with a bunch of strong and inspiring women and have a heck of a lot of fun doing so.

*I didn’t let anyone down.

** I didn’t hear the refs for most of the time.

*** I did fall and knock the bench on arrival to the sin bin [thank you lovely NSO’s for not telling me off]. Not quite the controlled majestic power of a leopard I had in mind…more like a drunk giraffe.